I dislike how frills are stripped out of things to make them streamlined for faster and arguably better consumption. We should all stop doing that. 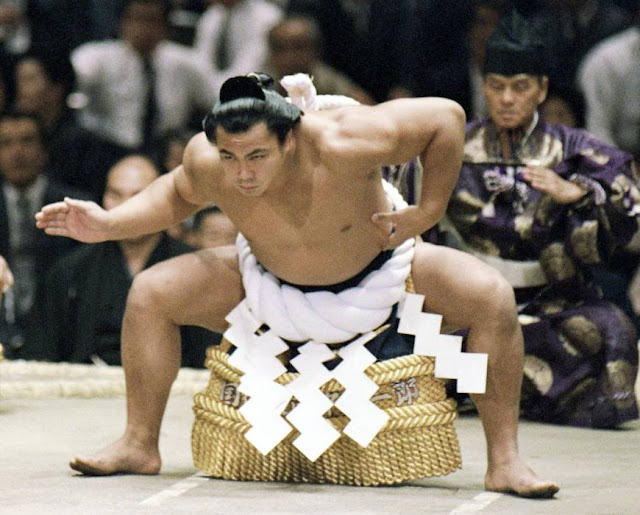 The Japanese national sport of sumo wrestling highlights something that I've felt for a long time about how Americans seem to approach everything. Before I get to this point, I should probably point out a little of how sumo wrestling is viewed in Japan so I can better explain what I'm talking about.

In Japan, sumo wrestling has been practiced for centuries, and it is heavily steeped in traditional culture. In one of the country's founding myths, a god by the name of Take-Mikazuchi won a critical sumo match against his opponent. There are currently around twenty-six (give or take) very accomplished wrestlers in Japan. I think ten (or so) are non-Japanese (seven of which are Mongolian). And the last time a Japanese wrestler won one of the six annual grand sumo tournaments was 2006 (disclaimer: I haven't really followed up on anything in the last few years).

Dominance of foreigners aside, there has been some discussion over the rituals that are involved in Japan's national sport (many of which are surprising to people that watch sumo wrestling in America--and I'm going to touch on this a little bit later in this post). Aficionados of the sport really like the rituals. However, a lot of foreigners think that it just complicates a sport that needs to be streamlined and down to business. Here are a few of the things that take place when you watch a match in Japan:

1) Sumo is a religious ritual and the wrestlers throw salt before a match to purify the ring (due to Shinto tradition). Every newly promoted Yokozuna (the highest rank in sumo) performs his first ring-entering ceremony at the Meiji Shrine in Tokyo. The ring is considered a holy place.

2) The wrestlers engage in psychic battles. The rules say that the match doesn't start until both wrestlers have placed both hands on the ground at the same time. Wrestler's purposely pretend to put their hands down and get back up again (on purpose) to screw with the other guy's head.

3) Sumo referees wear traditional clothing, and as they progress up the ranks, they earn honorific names. They are called "gyoji" and they carry a sword called a tanto. The significance of the sword is to show that the gyoji understands the seriousness of his decisions. In the past, he was expected to commit ritual suicide by disembowelment if he made a bad decision.

And this leads me to my point: when I watch sumo in America, it's all very business-like and boring because Americans have gotten rid of all the rituals and streamlined the sport (like they have with everything else). Why is our culture so obsessed with seeing something as its most basic truth? Let me shift the topic just a little bit so as to highlight this "paring down" to other areas of our lives.
I recently spent some extra money acquiring some gorgeous hard-bound books with fancy covers and illustrations. One of them was a copy of Neil Gaiman's American Gods, which I reviewed in this post HERE some time ago. Back in 2011, I read it as an ebook. And you know...showing someone a book on an electronic reader is just not the same as having a physical copy. I love the idea of pulling a book down from a shelf and turning pages and showing someone this beautiful novel. The reason I purchased so many ebooks over the years was that I always needed to move to a new apartment, and I didn't want to haul around a bunch of weight or go to the trouble of finding a place to put all that stuff. It was just better to forego all that inconvenience for one tidy electronic file.

But now that I own a house, I look back on those decisions with a bit of regret. I think we've all gotten away from something in just about everything we do. The "It doesn't matter what it looks like, I just want the content," has a purpose I suppose, but a life with things that has no "frills" makes me feel empty. And as I talk with more and more people, I think there's a pervasive emptiness in our American culture that people are all aware of, yet no one can seem to put their finger on it. That is...I run into a lot of people that feel empty of something every day.

Why are so many of us only concerned about what a thing is in its absolute truest form instead of how it is properly presented to the world?

Does no one know how to appreciate art anymore? Does no one understand the importance of nuance to soften hard edges...to let a thing be more than just its absolute basic truth in order to take into account how it is perceived from many different viewpoints?

I hear phrases every day that sound like this:

"I don't have time for all that. Just give me the highlights."

"Can you summarize it for me?"

"I don't care what it looks like. Just show me how to use it."

"This is nothing more or less than a recognition of reality."

"I prefer texting because it gets rid of small talk."

"Why do I need to read the book when I can watch the movie? Bam...whole season of A Handmaid's Tale done in two days, and I get to share the experience with someone."

"Why does anyone care if I abbreviate it 'Xmas'? It's the same thing."

I'll be honest. Stripping things whether they are books, sports, political talking points, art, or holidays down to the exact nature of what they are really fatigues me. Yes, a book is just words so who cares how the words are downloaded into your brain, right? An audio book should be just as good as anything, right? But it's not the same thing. I'm not sure how I can even explain this point effectively to someone that just doesn't get it.

I dislike how rituals, traditions, or for lack of a better word, "frills," are stripped out of things to make them streamlined for faster (and arguably better) consumption. In fact, maybe all of us would benefit as a society if we took the time to slow things down. Lets fill all our conversations up with small talk again. Let's stop using abbreviations in text communication. Let's stop texting as much. And let's buy pretty things because they are pretty and not because of their functions.

Or maybe I'm just a little crazy and old-fashioned and seeing all the things wrong with the world.
Posted by Michael Offutt, Phantom Reader at 5:37 AM

Email ThisBlogThis!Share to TwitterShare to FacebookShare to Pinterest
Labels: Art, books, I dislike how frills are stripped out of things to make them streamlined for faster and arguably better consumption, sumo wrestling