This year's CW crossover is the superheroes from good Earth battling a whole Nazi universe. 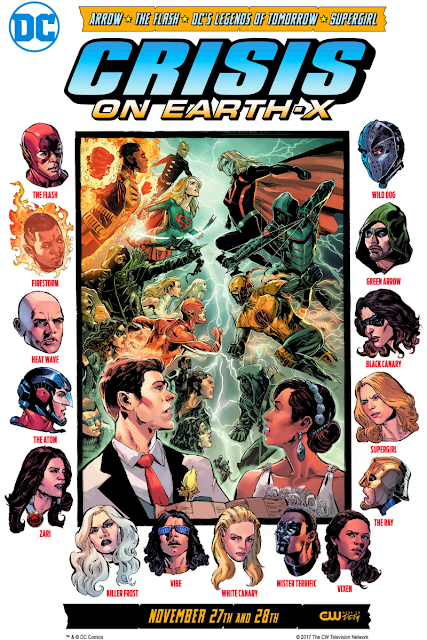 I've talked about Crisis on the Infinite Earths a couple of times now. Once in 2015, it was because of the introduction of Iris's then secret brother, Wally West. And then back in 2012 I did a post celebrating how much I loved the artist George Perez, who did a lot of the artwork for Crisis on the Infinite Earths. And then there's this post I did on the Flash Pilot back in 2014. But, as much as I'd love a Crisis on Infinite Earths to explode in the DC universe across the CW's many DC franchises, what we're getting is different, but probably still very cool. Essentially, Barry and Iris's long awaited wedding pulls together all of their various friends from every universe that's been introduced and it also is crashed by evil Nazi versions of Supergirl, Arrow, and the Flash from Earth-X (because on Earth-X, the Nazi's won).

I just want to get this out of the way: Supergirl's outfit looks f'ing awesome. If Melissa Benoit can pull off wearing that much black, it will be epic.

1) Maybe in the universe of Earth-X, Donald Trump is an egalitarian feminist anarchist fighting the system.

2) One of the highlights of Legends of Tomorrow was Brandon Routh who infiltrated a Nazi party and was physically unable to do a "heil Hitler" salute out of disgust and ultimately punched a Nazi general. They need to top that.

3) The CW poster is an homage to the following comic book covers that appeared over the years in Justice League of America: 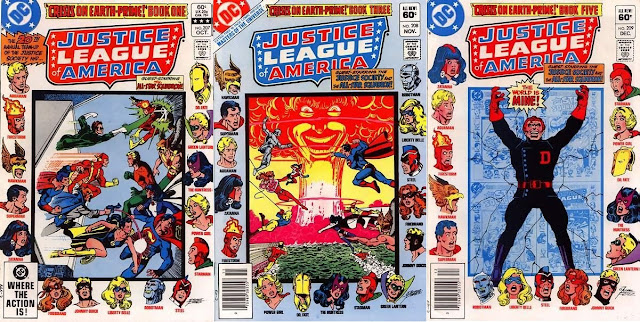 4) There is no end in sight for the "Barry Allen's" that the CW can come up with. So far we have: Normal Barry, Evil Barry, Emo Barry, and Nerd Barry.

5) Grant Gustin Barry should meet/see Ezra Miller Barry (from the movies) in the Speed Force and high five each other.

6) The evil version of Oliver Queen should just be "Ollie" with hair dyed black and no discernable personality differences.
Posted by Michael Offutt, Phantom Reader at 12:06 AM

Email ThisBlogThis!Share to TwitterShare to FacebookShare to Pinterest
Labels: Crisis on the Infinite Earths, This year's CW crossover is the superheroes from good Earth battling a whole Nazi universe