Pixar's Coco is one of the most beautiful movies I have ever seen and makes me wish I had a larger family. 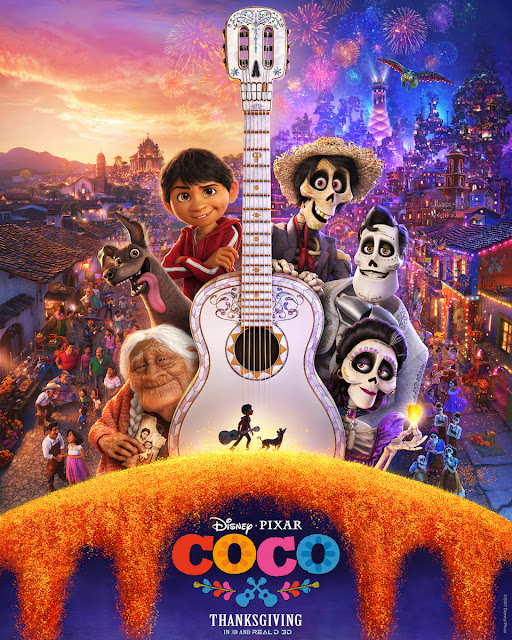 This Sunday, I saw Pixar's Coco. I've been in a mood for a movie like this, probably because this week is the one year anniversary of my mother's death. I think about my mom all the time. It comes in little snippets of things that remind me of her. The latest happened while I was watching "Boss Baby" with my friend Jake, and there's a scene in it in which the boy loses his training wheels and rides a bike for real. It reminded me of my mother, who taught me how to ride a bike, and convinced me (despite being afraid) that if she could do it, then I could do it too. That's the kind of person she was. And that's what I saw in Pixar's Coco.

I knew next to nothing about Dia de los Muertos, the Mexican Holiday on which the movie centers itself. The story is about the importance of memory, and why it is important to remember people once they are gone. If anything, this is the nature of any true immortality that any of us can ever hope for. And it's remarkable how well Pixar puts down the emotional layers, slowly building the story of a boy who desperately wants to play music and eventually runs away from his family because he doesn't want them squashing his dreams any longer. In time, he comes to understand that all is not as it seems, and uncovers a powerful and very moving fact about his ancestor that had me shedding tears in the finale of the film. Pixar (if anything) knows how to put together a masterpiece that manages to be both joyful and sorrowful at the same time.

Coco is one of the most beautiful movies I have ever seen. The sheer amount of colors found in the movie combined with gorgeous scenery, Mexican culture, and a terrific story, made Coco a movie that I will long remember. It had terrific spirit animals, fantastic music, a hairless dog that was really cute, and the movie was able to look at the darkest parts of humanity while keeping an eye for grace and justice. In the end, I just wished one thing: that I had a larger family. I suppose it's that sentiment that touched my heart the most.

From everything I've read about the film, it took six years to bring this project to the screen, because filmmakers were trying to find a story that felt worthy to be in the world. And I suppose that dedication paid off, because it's now the biggest film in Mexican history, and the number one film in the world. This kind of success is its due, for it couldn't have happened to a more deserving movie.
Posted by Michael Offutt, Phantom Reader at 12:02 AM

Email ThisBlogThis!Share to TwitterShare to FacebookShare to Pinterest
Labels: Coco, Dia de los Muertos, Pixar's Coco, Pixar's Coco is one of the most beautiful movies I have ever seen and makes me wish I had a larger family