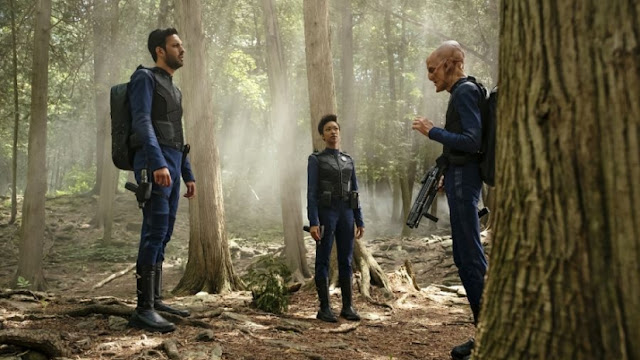 Star Trek: Discovery ran a pretty weak episode last night when you compare it to how the earlier episodes went. However, it was still leagues above anything in the first seasons of Star Trek: The Next Generation and Star Trek: Deep Space Nine. It was also the penultimate episode right before it airs the fall finale, after which I can cancel my subscription for a few months. Was it worth the $5.99 a month to see the episodes? Yeah. But if you haven't signed up yet, it'd be worth it to just binge watch using the one week free option that they offer for CBS: All Access. I kind of wonder (amusingly), if there's going to be a raft of cancellations right after the fall finale airs next week. I think I would LOL if there is.

Last night's episode was called Si Vis Pacem, Para Bellum, and there's going to be a few spoilers as I discuss what happened. First off, what didn't work? They really developed the "Kelpian" race in this one. The Kelpian crew member is Saru, and he's a prey species. Pretty early on Michael Burnham rattles off some statistics about Kelpians (as they are investigating a new planet called Pahvo), and she says that Kelpians can run really fast (in the neighborhood of 80 km/hour). We can assume that this makes them pretty strong too as strength definitely factors into speed. So what does a viewer with any intelligence make of these carefully packaged facts? Probably that the Kelpian is going to turn on everyone in the landing crew and use his super powers to take them down. And that's pretty much what happens. It was a kind of clumsy way to do foreshadowing. Add to this the fact that the animation of the Kelpian running through the forest looked terrible, and the crystals that surrounded this antennae that rose from the ground into space looked plastic...and it all adds up to a kind of blase episode at best. Don't get me wrong...the effects still look good overall, and I'm still not tired of seeing the black alert spore drive animation, but some of the other effects were borderline bad.

We also got to see the Klingons again, and we got the pleasure of reading lots of subtitles. Look, I respect the fact that someone at some time got really creative with Klingon and gave them their own language. Cool beans. I just fatigue easily when it comes to reading subtitles, and it always makes my brain hurt when I have to read the Klingon ones for minutes at a time. There was some development on the Klingon side, however, that was a little unexpected. Thus far, they've been the Federation adversaries lurking as specters in the background, basically raising the tension of everything that the Discovery does because they are beating the Federation so badly. So the development came in the form of L'Rell, who confessed to Admiral Cornwell (who is a prisoner) that she wishes to defect and proposes that she and Cornwell escape. Of course, this all goes tits up when they are seen and L'Rell murders Cornwell to dispel suspicion.

We also got some concrete information from Stamets (the engineer) who says the spore drive is essentially killing him, and that he's keeping the information from Culber, who's his partner and the ship's medic. This essentially means that the spore drive is probably going to fail at a crucial point in the fall season finale, otherwise there isn't going to be an effective cliff hanger to bring us back in the spring. So yeah...there's that happening.

One of the things I did like that this episode did effectively was give us a view into Saru's mind. As a prey species, he's born afraid and lives with fear every moment of his life. The alien planet Pahvo had some amorphous aliens which took that away from him, and for the first moment in his life he knew peace and comfort. I thought that was a really neat touch, because I could empathize somewhat with how awful it must be to live in fear all the time. To have that suddenly gone...man...that must have felt amazing. That was one of the more profound touch points of the episode and in the series thus far.
Posted by Michael Offutt, Phantom Reader at 12:06 AM