Here are my thoughts on the season 7 premiere of Game of Thrones. 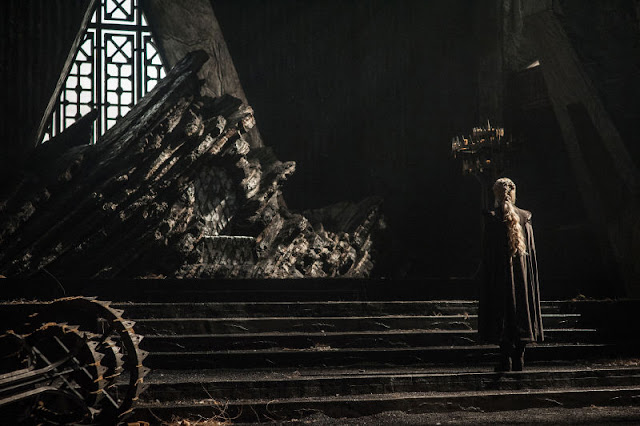 I loved the season 7 premiere of Game of Thrones last night on HBO. But there are a few things that bug me with the gap in time between seasons. I mean obviously...there has to have been some time (a month maybe) for Daenerys to sail to Dragonstone with her fleet. If I'm being generous...perhaps three months at sea? So in that time I'm expected to swallow a few of the following (which I did...but I'm kind of complaining about the time compression here):

1) Euron Greyjoy built a thousand ships. Yara and Theon stole all of Euron's good ships, so he had his men go about building more. It seems to me that a thousand ships would be a tall order. They sure as hell slapped those suckers together fast. I mean...the Iron Folk are experts at sailing, but it just makes me wonder how they could put together so many ships in so little time.

2) How did Jorah get all the way to Old Town? I suppose he left Daenerys in the desert so there was enough time that passed. But why did he go to Old Town? I thought for sure he'd go back to the woman that wore the veil in front of her face that we met in season two that said she knew of a cure for greyscale (Jorah's disease). It's disturbing how much of it has progressed, by the way.

3) Why is Jaime Lannister not furious with Cersei? I didn't expect the banter between them to go with such civility. I mean she's a psychopathic murderer whose directly responsible for one of his son's deaths. I don't know why he didn't just strangle the life out of her in last night's episode.

Now onto some assorted musings about the premiere:

1) The White Walkers have undead giants. I wasn't expecting that, and it was a nice touch. Mark my word...before it is all over, Lady Mormont will kill one of those single-handedly.

2) Euron had the balls to mock Jaime Lannister in the throne room in front of Cersei. "I have two good hands." That was hilarious.

3) The Hound has really won me over as someone that has a good heart. I never expected that of him. He has a tremendous amount of empathy for the small folk, and he's swiftly becoming a favorite character.

What about you? Any assorted musings you'd care to share from your watching of the "most-watched television series of all time?"
Posted by Michael Offutt, Phantom Reader at 12:01 AM

Email ThisBlogThis!Share to TwitterShare to FacebookShare to Pinterest
Labels: Game of Thrones, Here are my thoughts on the season 7 premier of Game of Thrones