The Great Wall movie by Zhang Yimou promises to be the valentine's gift I totally deserve. 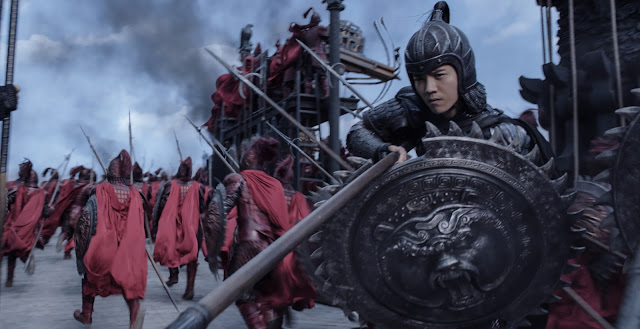 I want to see The Great Wall movie that's coming out in February even though it's a Chinese spectacle that's somehow found it reasonable to cast American Matt Damon as its star. Just to be clear, I like Matt Damon, but I kind of think that it's a little strange to have an American in a title role for a Chinese film. Not too weird...but it gives me pause in the same way as Tilda Swinson's casting as the Ancient One in the upcoming movie, Doctor Strange. But...whatever.

Or maybe I'm just noticing Matt Damon being so important in the movie, because the movie is being marketed to American audiences. Gotta admit that this is probably the more likely explanation. In that case, never mind my above comments. We do have assurances from Matt Damon that him being cast is "not whitewashing."

I know most of you probably haven't even heard of this movie, so I'll embed the trailer below. And to tell you a little about it, the movie is from director Zhang Yimou (who made Hero), and it's a complete fantasy about giant monsters attacking the Great Wall of China in some ancient, alternate history. Matt Damon and Pedro Pascal are mercenaries fighting alongside the Chinese armies. And as usual, Zhang uses color really well.


If you get around to watching the clip, I do have a question for you: Did anyone else find it odd that Damon is playing a man from the West but has an American accent? Meanwhile Pedro gets to do a Spanish accent even though his real accent is decidedly American. That just seems odd and is probably something that not too many audiences will notice. But yeah, I noticed it so I'm pointing it out :)
Posted by Michael Offutt, Phantom Reader at 12:01 AM

Email ThisBlogThis!Share to TwitterShare to FacebookShare to Pinterest
Labels: The Great Wall, The Great Wall movie by Zhang Yimou promises to be the valentine's gift I totally deserve, Zhang Yimou