In the world of today financial ruin is almost the same thing as being killed. 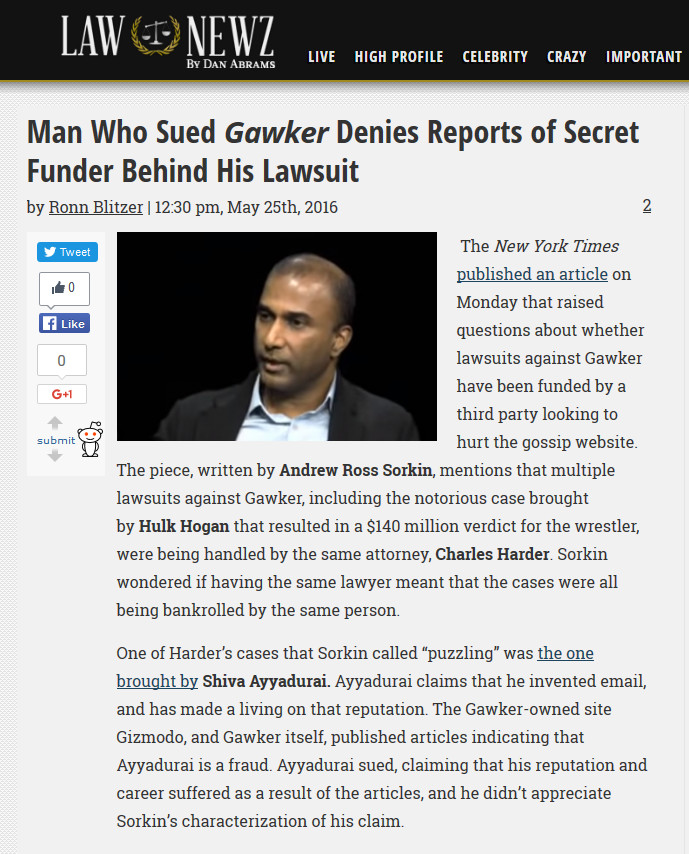 One of the websites that I sometimes read is called Gawker. Its journalism is frequently entertaining, informative, and caustic to public figures. One of the reasons that I like their brand of journalism is because the site doesn't go out of its way to present public figures as anything but human (or inhuman) with all their flaws exposed by the opinion of the writers (who tend to see the world as I see it). If a person's a giant douche, they basically call them a douche and explain why.

Gawker doesn't concern itself with preserving reputations, buying into the glamour of celebrity status, or for that matter...posting very unflattering things about people. I guess I like it because there's too much fakery in the world, with people posting their narcissistic photos on Facebook and trying to put on that their lives are "oh so perfect" while yours is (in fact) a mess. So I'm a "little saddened" that Gawker is facing an existential threat in the form of lawsuits funded by a butt-hurt and angry billionaire in Silicon Valley by the name of Peter Thiel. The most public of these is the one brought against Gawker by Hulk Hogan that has cost the website millions of dollars in legal fees and got Hulk Hogan a judgement against Gawker to the tune of $140 million.

The First Amendment guarantees free speech and that Congress shall not impugn upon that with laws that could curtail free speech. But it obviously doesn't protect against people using lawsuits to destroy journalists financially for the things they've written. With income inequality so startling in our country, it is a frightening thing to think that one person with incalculable wealth could bring lawsuit after lawsuit against a company doing investigative journalism with the sole purpose of silencing them forever.

Another example of this happened in my hometown of Idaho Falls just recently. A billionaire that lives there that owns a company called Melaleuca used his fortune to go after Mother Jones following the 2012 presidential race in which Mother Jones exposed Mitt Romney in "47 percent" remarks that are now famous. Mother Jones successfully defended themselves in court, however, they reported on their website that it cost them millions upon millions of dollars. Basically, it almost bankrupted them.
It's become more clear over time that the world of James Bond's best villains is now becoming a reality. Mega-rich people wield tremendous power through their money and if they happen to be vindictive, angry, petulant, sore-losers, or just plain bad people then the world should watch out, because they not only can financially destroy a person but entire corporations through the justice system. It may even get to a point where fear of financial ruin causes journalists to stop reporting the truth about something, because in the world of today, financial ruin is almost the same thing as being killed.
Posted by Michael Offutt, Phantom Reader at 12:09 AM

Email ThisBlogThis!Share to TwitterShare to FacebookShare to Pinterest
Labels: In the world of today financial ruin is almost the same thing as being killed, Peter Thiel Gawker