Sometimes Doctor Who has a plot so complex that I'm not sure I quite understand what's going on. 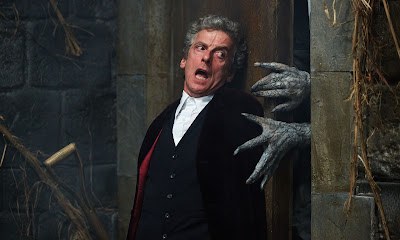 This post contains plot spoilers for "Heaven Sent," episode 11 of this season's Doctor Who.

I'm not sure what to think of this season's Doctor Who. First off, I'm actually not positive that I understand it either, but maybe that's the point? Last week we bid farewell to Clara Oswald, who (in being very much like the Doctor), had become reckless. Her death was uncomfortable, but I think the character of Clara had run its course so maybe this way was the best way to go forward? However, the result of Clara's death was the doctor being ensnared by Ashildr into his own confession dial, which (as it turns out) is a revolving castle where he's stalked by a monster that epitomizes his greatest fear.

The episode Heaven Sent (episode 11 of the 35th series of Doctor Who) was brilliant in its creepiness. There was the slow plodding monster that always caught up to the Doctor (82 minutes was as much of a lead as he could get on the thing if he ran from one side of the castle to the other). In order to open up new corridors, he needed to confess to the monster something deeply personal, which then caused everything to move as it does in Hogwarts.

Eventually, he'd find himself at room 12 which had some kind of wall harder than diamond and many feet thick (covering the way out which consequently led to Gallifrey--the doctor's home world which he kind of/sort of destroyed). He could hammer at it with his fists and make a small chip here and there like a bird pecking at a diamond. Then his greatest fear would catch him and...dying...the doctor would crawl back to a room where he would fry his own brain with an electrical charge to force a version of himself stuck in the hard drive of a computer to be born so he could start over again (have you guys ever seen the movie "The Prestige"? It's like that). After several billion years of doing this and repeatedly chipping at the wall, he finally breaks through to find Gallifrey. At least, that's what I got from it.

The episode was as creepy as Doctor Who gets too. It effectively used lighting and the loneliness of being trapped in this shifting prison (not to mention the buzzing flies which heralded the approach of the monster) to convey fear. And when the mystery of thousands of skulls buried beneath the water was solved (they all belong to the Doctor and his billions of reincarnations) the true horror of this place set in. Basically, the Doctor was trapped in his own hell and just like the journey the narrator takes in Dante's Inferno, he had to pass through the portal in the ninth layer before he could begin the ascent to some kind of redemption.

Anyway, the great reveal at the end of the episode is another confession from the Doctor: that he's the Hybrid, and I've got to confess I'm not really sure what that all means in the lexicon of Doctor Who. Any readers care to explain it to me? I'd be interested to know. This series continuously pushes the envelope of what I think I understand.
Posted by Michael Offutt, Phantom Reader at 7:14 AM

Email ThisBlogThis!Share to TwitterShare to FacebookShare to Pinterest
Labels: Doctor Who, Heaven Sent, Sometimes Doctor Who has a plot so complex that I'm not sure I quite understand what's going on