Oh the cliffhangers and the endings. Everyone knows by now that Martin loves to kill off characters. Jon Snow died in A Dance With Dragons, and yes it happened at the end of the book. I was wondering if the show was going to end there and sure enough it did. But here's why I think Jon Snow's death is going to be different than all of the other deaths in the show: 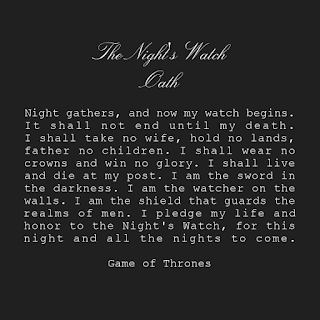 1) The men of the night's watch swear vows, and the only thing that can release them is death. During burial, the men of the night's watch send off a brother by saying the words, "...and now his watch is ended." Jon Snow was Lord Commander of the Night's Watch, and not Stannis Baratheon or anyone else was going to cause him to derail his vows. The only reason he allowed himself to deviate from them with Ygritte was because he was trying to blend in as a wildling so he could get close to Mance Raydar. With his death, he is released from the vows and free to be king if he could just come back from the dead.

2) And about that pesky "death" thing...Melisandre of Ashai is probably going to resurrect Jon. Earlier in the series, they came across another priest of R'hllor named Thoros who had the ability to resurrect Beric Dondarrion over and over. These two priests are powerful and admittedly, they see the practice of their religion in entirely different light. However, their magic comes from the same source, a.k.a., the Lord of Light, and I think Melisandre is going to raise Jon so that he can become "Azor Ahai Reborn."

3) Azor Ahai Reborn comes from a prophecy that is told to us through the lips of Melisandre. She says, "I pray for a glimpse of Azor Ahai, and R'hllor shows me only snow." Hmm. That's interesting, don't you think?

4) The smartass author George R.R. Martin responded to a question about Jon Snow with this remark: "Oh you think he's dead do you?" I think this pretty much means that the character is going to come back with a vengeance.

5) The rumor mill on the internet says that Kit Harrington's contract has been renewed for seasons 6 and 7 (the last season). Hmm. I wonder why they would do that?

Sure, it's just a theory, but do any of you who've read the books and saw last night's episode actually believe that Jon Snow is dead and joins the rest of the "dead" characters littering the series? I think Martin's going for a twist here. By now we expect characters to die. It's time we saw one survive.
Posted by Michael Offutt, Phantom Reader at 7:10 AM

Email ThisBlogThis!Share to TwitterShare to FacebookShare to Pinterest
Labels: Azor Ahai come again, Jon Snow, With regard to that ending on Game of Thrones last night I don't think Jon Snow is permanently dead