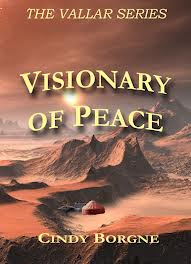 The Vallar saga by Cindy Borgne is a great "visionary" achievement. They are books so original and exciting they stir my imagination the same as the cutting edge of science can do when narrated by Stephen Hawking, Neil deGrasse Tyson, or Brian Cox. Like most science fiction space opera, Visionary of Peace imagines an alien world filled with technology, lots of gadgets, and fights between spaceships. But it also leaps into the vast and bleak terrain of Mars to visit such unknowns as the Nocturne Labyrinthus and the largest volcano in the solar system: Olympus Mons.

The German director Werner Herzog has said that we live in an age starved of new images. What Cindy Borgne provides us in her sequel Visionary of Peace is the solution to such starvation by borrowing visuals literally ripped from the Mars Rover. Man is already leaving tire tracks on Mars. How long before those tire tracks are a footprint and before corporations rise to terraform the red planet?

Cindy Borgne nourishes us with a tale that shows human nature is not so different in the far future, despite all that has happened. Psychics now dwell among humans, and scientific advances have made wormhole creation a reality, giving man for the first time in history the ability to step beyond Sol and colonize a world orbiting an alien sun. We still have wars, people still die in violence, and the battlefields have become the windswept rock of Mars. However, there is hope in the true "Visionary of Peace" who is named at the end of the book. Perhaps it is appropriate that the dust of the fourth planet is red, because this narrative is steeped in blood that is not so much a story, but an experience because of the first person alternating narrative of two lovers, Ian and Kayla, who despite all odds find a way to make things work in a breathtaking romance that spans the stars. Ah to be young and in love and saving the world. I think even Arnold Schwarzenegger in "Total Recall" could get on board with that concept.

Visionary of Peace combines science fiction, space opera, and young adult "coming of age" in surprising and refreshing ways making familiar elements new. Cindy Borgne employs insect swarms that are in fact machines, explores betrayals among corporations and friends, and her villains are merely so because their motivations run completely counter to those for whom we cheer. Toward the end, there is a thrilling, almost apocalyptic battle that left me on the edge of my seat. And I have to say upon finishing, this is a book for anyone who still has a sense of wonder and a feeling for bold visual style.

I look forward to the next book in this series, and I hope that Cindy writes it soon.

I give Visionary 5 stars out of 5 and recommend it to anyone who likes sci-fi epics and wonderful, emotional characters.

Have a great Tuesday. Tomorrow I will be hosting Ellie Garratt early and for two days (Wednesday and Thursday) because she's on the other side of the world, and I want her post live so there is no problem in linking from the UK to the US.