Our Flag Means Death dares to tell a pirate story that no one has ever touched and it's incredible. 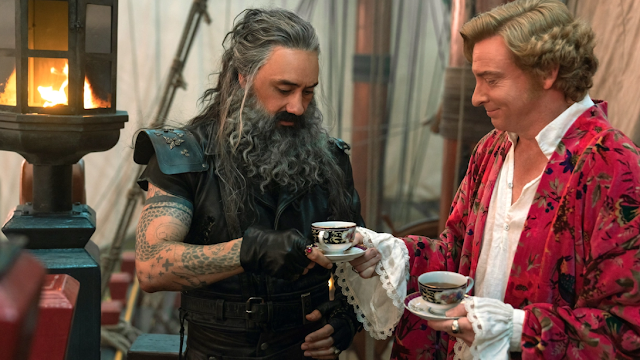 Our Flag Means Death is a show on HBO Max that I absolutely loved. It's a queer pirate story told through the brilliant eye of Taika Waititi, who stars as Blackbeard in the first season. And I just want to emphasize that I loved this show even more as a gay viewer. After finishing the first season, and desperately wanting more, I realized something about modern queer representation. It's so rare that audiences who are interested in seeing it have essentially been trained to look for these tiny little clues of queer coding.

I mean...just think back to Disney celebrating its "First gay character" and then it's a guy dancing with another guy in the background or a line of dialogue that could easily be missed. It's like the glances between Finn and Poe in Star Wars...what do those glances mean? Or Dumbledore is gay...but it is mentioned (by the now shamed author) years after the original series in which she made her fame, and it has been printed and minted billions and there is literally nothing to lose.

This (of course) then clashes with tropes like the infamous bromance. This is a plot device where two dudes are shown to be close, often even using typical romance imagery, but they are never actually allowed to be in love because they're quick to push the "no homo!" panic button. "He's like a brother to me!" is the new "no homo" because it is ubiquitous today.

So, viewers like me experience a lot of queerbaiting as a result. If you are unfamiliar with this term, it's when a show/film/whatever is building up the expectation of a queer character being in there somewhere and then not delivering on that in a satisfying way (if at all). To be fair, it can happen a bit unintentionally, like when two actors have surprisingly amazing chemistry, and they're even up for something more to happen between their characters. But...then the writers refuse to do anything with it. In the meantime, you put a man and a woman next to each other, and that's pretty much all there is to the gazillion paper-thin hetero love stories.

Our Flag Means Death even went beyond this though. Not only did it show a complete homosexual love story between Blackbeard and Stede Bonnet (played by Rhys Darby), but it also allowed fat characters to be fat without that "being" their character or the butt of jokes. The show also had characters with speech impediments and other "often mocked" traits and behaviors. And the main characters were middle-aged men who just got to live in their emotions and express what they felt for each other.

And apparently, it's all based off a true story. If one researches the actual Stede Bonnet history, you'll find that it is surprisingly ample online and in history books, and the whole gay innuendo really leaps out between the cracks of the narrative. As people did back then (and they still do), the gay aspects are danced around and waved away, but there are clear subtext once you decide to look. Stede left his marriage due to a "mental issue," and he and Blackbeard did indeed share years of their lives together. They were clearly drawn to each other and each featured aspects that were admired by the other.

I was already a huge fan of Taika Waititi after Thor: Ragnarok and Jojo Rabbit. However, Our Flag Means Death came as a total surprise...like a present...from a legendary director that sees me and my community clearly enough and who has the guts to be extra as hell. The show is hilariously funny, and it is full to bursting with the kind of storytelling that one can feast on. If you are looking for something to watch, and you haven't heard about this one, I'd urge you to give it a try.

Posted by Michael Offutt, Phantom Reader at 7:24 AM