Are beauty standards just made up? 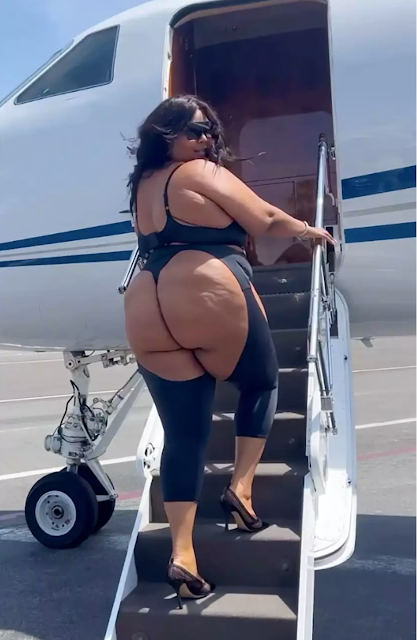 Lizzo made the news because she posted a picture of herself on Instagram wearing the Yitty logo (featured on the cropped leggings) and also on the underwire strap of the bra. And yes, it got my attention. In case you don't know, "Yitty" is Lizzo's shapewear line. It's billed as a revolutionary shapewear band that exudes self-love, radical inner confidence, and effortless, everyday wear. So here's my question that popped into my head when I saw this: are beauty standards just made up?

I'm not here to weigh in on whether or not I find Lizzo attractive. The only thing that matters is that she thinks so and that others seem to share the sentiment. We live in strange times, and I'm one of those people who (maybe) spends a little too much time trying to answer the question why? For example, if I don't find Lizzo attractive, why is that? Is it self-loathing because I myself struggle with weight? And if it is "self-loathing" projected onto someone else...what has made me this way? Is it the fashion industry forcing me to go to specialty stores to find my size? Is it doctors telling me that every thing that is wrong with me can be traced back to obesity so that they actually don't have to do any work? Oh...you've got a rash? It's probably because you are fat. Oh you've got high blood pressure? Again...fat. Oh you have cancer (I don't, but I'd expect to hear this)? Did you know that fat people get cancer at 3x the rate of people with normal B.M.I.? Oh you're balding? Maybe it's cause you were fat and that killed the hair cells on your head. Being fat is literally an excuse for everything.

So I wonder...is what we find beautiful or attractive just all made up? What other things are made up? It turns out that there's quite a bit that is. TikTokers lately have become aware that in Ethiopia, it is the year 2014. It's because they run their calendar different based off when Christ was supposedly born. So their calendar doesn't start in the same place that ones in the Western world does, and because they were never colonized, they didn't have a regime telling them any different. But does it matter that it is 2014 there and 2022 in America? Probably not at all unless the idea of that unsettles some people, because they suddenly realize that time is a manufactured concept and our way of keeping track of it is also a thing that people decided upon.

Rules are the same thing. At work, I'm helping to write a policy manual for our agency. There's a bunch of people involved, and they are leaders in the agency. I'm there, because I have a strong technical writing background. Anyway, because I'm actually writing the thing, I get quite a bit of input on how things are phrased. I also get input on what is included. On more than one occasion I've thought to myself, "before this policy manual you could just do a thing. But once we make it policy, it has to be done a certain way, or we will be breaking rules which will be cause for disciplinary action." It's weird to think of things like that, because we are just making up stuff. But years from now, or when I retire and someone else does my job, they will look at the policy as "rules to follow" and they won't understand that I just strung words together in a paragraph that dictated a kind of behavior. In other words, they might not get that it was all just "made up" out of nothing. And the biggest mind job of all is realizing that, just because something is made up, does not mean that it doesn't matter. On the contrary, made up things can be very powerful depending on who believes the made up thing (and who enforces it).

It's a weird thing to see this on the world stage as well. Vladimir Putin, the dictator of Russia, has no rules that bind him because he has access to a nuclear arsenal. Because the threat of radiation and destructive fire is so catastrophic, he can basically do whatever he wants to do. If he sends people into another country to rape, pillage, murder, knock over buildings, destroy things, even paint polka dots on anything that's around...he could do that/has done that. It's strange to think that we try to impose rules on war, when war (it seems) is taking civilization back to the policy manual stage (where there is a blank page and literally every kind of behavior can be indulged) and just dictating whatever policy you want to dictate into a book and later generations will have to live by whatever gets splashed on that page.

Put another way, war is like a huge paper shredder to all the rules and laws that come before that were probably put in place to manage all the many versions of "consent." War is taking the word "no," ignoring it, and trashing the other person's consent to everything and just doing whatever you want. It seems chaotic and awful and it is undoubtedly destructive. However, in the fact that there seems to be no rules at all involved with it, it's probably the closest we ever come (as a society) to being true animals like sharks in the ocean and wolves in the forest. So one could argue that what humans are in a time of war is our true nature. And have you ever thought of this? War itself is fought for freedom in so many ways. However, war itself is also the ultimate expression of freedom to do whatever you want constrained only by the violence visited upon you by the opposing party. I've never fought in a war, but I think that people who have, who have really been in the thick of it, could probably tell you that everything is made up. What we understand as rules, laws, notions of what is beautiful and ugly, human rights, our money, our age, how we measure time,...literally everything...is all made up.

So, if I'm correct, then another question pops up. How can I/we use this? How can knowing that everything is made up come of benefit to living our lives? I suppose just having the self-awareness can give us all the freedom to let go of things. Additionally, going forward, a lot of us could take things a lot less seriously and realize that rigid thinking is just a construct...it's a box that we put ourselves in to limit anxiety of the unknown. But it doesn't do any of us any good, especially when it makes us unable to see beauty that may be right in front of us.

Posted by Michael Offutt, Phantom Reader at 7:09 AM

Email ThisBlogThis!Share to TwitterShare to FacebookShare to Pinterest
Labels: Are beauty standards just made up, Blogging, Lizzo