Now that the Meg 2 has been greenlit I've got questions. 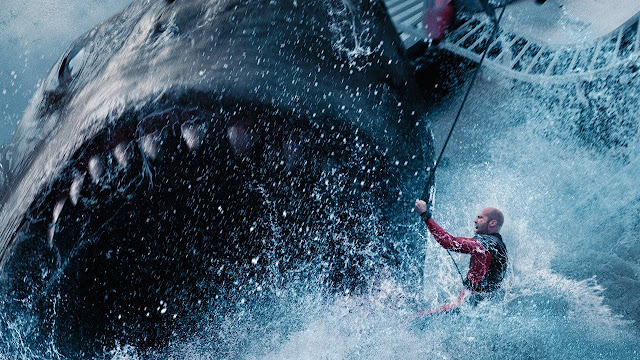 The Meg, which is a show about prehistoric giant sharks unleashed into a modern ecosystem, is getting a sequel. I really enjoyed the movie, mostly because I like shark movies, and I tend to watch all shark movies. In the rankings of shark movies overall, it is in my top ten. And honestly, that's not saying much as Jaws will always be a masterpiece, and the rest are just hot garbage. But I do like hot garbage from time to time.

That said, I'm curious to see if the sequel will bring back Li Bingbing and continue the interesting romance between her and action superstar, Jason Statham. I like Jason Statham. And by "interesting," I like that there was one in the first place. Most made with/for China movies never features any romance between the Chinese female lead and the American male lead. Sometimes one character will note how they think the Chinese woman is good looking, but it's always a one-way street that never goes anywhere. There are probably a number of sociopolitical reasons to explain this. And in today's world, there's a lot of China hate coming from America (being broadcast with a megaphone) even as we continue to purchase and use their products because things made in America are too expensive, i.e,. wages are too low in America to afford to buy American.

I was actually surprised by The Meg. It was immediately different, with one scene of Li Bingbing ogling a naked-but-for-a-towel Jason Statham. It qualifies as very thirsty on screen stuff. Do you like the word "thirsty" used in this context? I do love the ever evolving English language. Anyway, Li Bingbing did make it clear that she liked what she was seeing, and then there was lots of reinforcement from other cast members in the film saying things like, "You two should really be a couple." I think it would be awesome if we saw more of that headed toward something in a sequel.

It was also a movie that dared to kill a dog. Or at least sort of...we all thought the dog "Pippin" got eaten by the shark, but we do see it later in the movie alive and well. It was still goofy fun. The Meg never took itself seriously, which made it an awesome popcorn film.

And here's another musing: I wonder how a megalodon with actually "real world" physics would fare against a pod of modern adult Orcas. I think (despite the size of the shark) that the Orcas would kill it. They seem to have incredible intelligence and capability to coordinate attacks for killing things in the ocean.

Email ThisBlogThis!Share to TwitterShare to FacebookShare to Pinterest
Labels: Now that the Meg 2 has been greenlit I've got questions, The Meg