In a year we all get to watch another Godzilla animated movie on Netflix. 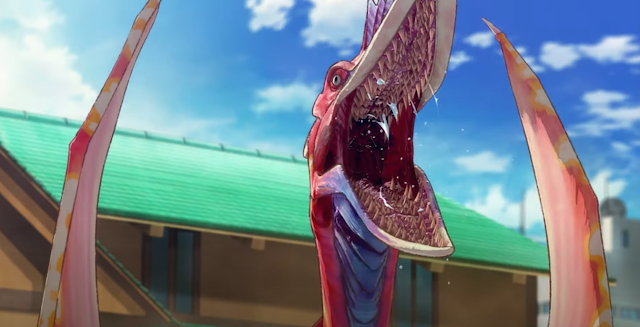 I really like Toho animation. It's escapism at some of its best, and it tends to have that classic nostalgic feel that some of the 1960's (is that the Showa era?) Godzilla movies evoke within me when I see them on tv. So, you can imagine my excitement when Netflix announced (this week) an exclusive called Godzilla: Singular Point. It is directed by Atsushi Takahashi, which actually means nothing to me. However, it's a Godzilla movie. So if it has other kaiju bashing it out--and the trailer does feature the giant transforming robot Jet Jaguar--well then...I'm sold.
That being said, there is one name I do recognize in this project. There is a brand new Godzilla design from Eiji Yamamori who (I think) is in charge of kaiju design. He is a rather legendary Studio Ghibli animator, with about 17 films to his credit, including being the "key animator" in Princess Mononoke, Spirited Away, Howl's Moving Castle, House-Hunting, Ponyo, The Secret World of Arrietty, The Wind Rises, When Marnie Was There, Mary and the Witch's Flower, and Doraemon the Movie. It's obvious that the guy is an expert and a renowned artist in his particular field.
The movie isn't due out for another year, so this is way ahead of its November 2021 release. In the trailer (which I have included below), there is no dialogue. It's just music. The two-horned pteranadon creature is probably Rodan, and the spikey dinosaur/anklyosaurus thing is probably Anguirus. There are two other kaiju either shown or hinted at, but I have no idea what they are. So your guess is as good as mine.
Posted by Michael Offutt, Phantom Reader at 12:03 AM

Email ThisBlogThis!Share to TwitterShare to FacebookShare to Pinterest
Labels: Godzilla Singular Point, In a year we all get to watch another Godzilla animated movie on Netflix