I really love it when Ridley Scott indulges his bent for science fiction. 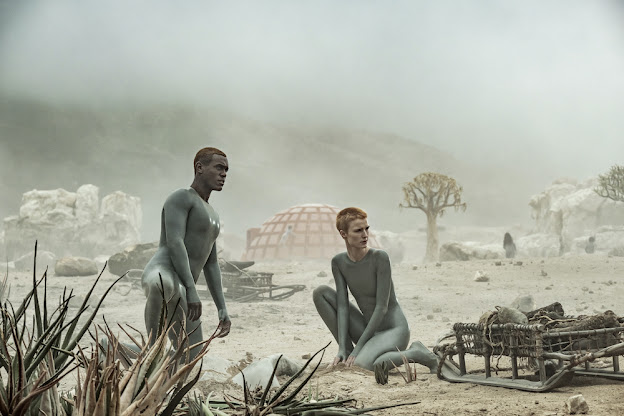 Ridley Scott is a great director. Even so, it's questionable whether he gets total creative control over his projects. Other directors who landed in the same boat are famous names like David Lynch, who calls his Dune adaptation done in the eighties as a great sadness in his life (because he was unable to realize his own vision of the book and had to bend to what the studio execs desired). The same can be said of Ridley, who started out with an Alien prequel series known as Prometheus and ended up having to film some hot garbage called Alien: Covenant, because the studio was cratering to fandom demand that the xenomorph be prominently featured.
So now we are stuck with a narrative that doesn't make sense, i.e., Prometheus and Alien: Covenant, none of which directly ties to the fossilized space jockey the crew of the original film found on the moon LV-426. And we probably won't get any answers, because the latter film did poorly, and the studio called 20th Century Fox was acquired by Disney and the franchise of "Alien" doesn't exactly scream "Disney Princess." So...there it is...in a nutshell. Nevermind, that there is apparently a whole movie missing between Covenant and Prometheus that explains exactly why David turned on Elizabeth Shaw, or why she even decided to piece him together, or why David decided to vivisect Shaw (which is apparent from the outtakes) and then create the first face hugger using the fingers of Elizabeth Shaw's own hand. I can't even understand David's logic in doing so, nor how we get from that apparent muckery to a spaceship piloted by a Space Jockey (one of the engineers) apparently loaded with these leathery eggs from a species that the android David apparently made by experimenting with the black goo, even though we saw him annihilate the Engineer homeworld in Covenant. Yeah...none of it makes sense.
However, this doesn't mean that I don't appreciate Ridley Scott's mind. In fact, Prometheus and Covenant both look like notes in a notebook to me...only they filmed it before a cohesive plot could actually be done. Like...it's what writers do before they get beta readers to come in and say, "Hey...none of these things tie together but you've got some really interesting ideas here." Which is to say (as a compliment) that I love it when Ridley Scott decides to indulge his science fiction bone...the one that says, "hey...let's do something that looks really cool!"
So, Ridley Scott is once again doing this kind of thing with a new series called Raised by Wolves that is about a very advanced synthetic lifeform kind of reminiscent of the androids in Alien who are tasked with raising human children on a planet far from Earth. It looks very cool, and I gotta say, I'm interested in seeing where this goes. No doubt, the android will be the bad guy here (as is the case with most synthetic lifeforms in Scott movies). I'm just curious as to what kind of questions he's going to be asking of the audience in thinking about artificial intelligence, and whether or not something synthetic could actually parent and thereby raise humans to treat each other differently than what we see on Earth. If you haven't heard of this series, check out the trailer below.
Posted by Michael Offutt, Phantom Reader at 12:05 AM

Email ThisBlogThis!Share to TwitterShare to FacebookShare to Pinterest
Labels: I really love it when Ridley Scott indulges his bent for science fiction, Raised by Wolves