I think Frank Herbert would be proud and excited by the Dennis Villeneuve adaptation of Dune. 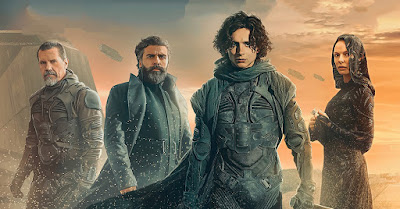 Dennis Villeneuve makes good movies. Now, he's bringing Dune to life in a two-part movie adaptation, and I really love it. Dune is a seminal work that has influenced a hundred things that came after it, whether it be Star Wars, Warhammer 40,000, or Robotech. Many of the things that we like in our nerd niches owe a bow here and there to Dune. It even influenced some of my early writing. I remember drafting a novel in college and sharing pages with my critique group. One of them (who went by J.C.) was very critical because I used a Dune-like intro to each of my chapters explaining this or that before the actual text started. J.C. hated that. "It works for Dune, but it doesn't work here. Cut it out." And so I did.

I can't explain for others why Dune is so cool. On paper, the majority of it takes place on a desert planet with no features at all except for sand dunes and some big earth worms. But for me, I've always enjoyed desert adventures and desert things, similar to an early childhood fascination with ancient Egypt. And Dune as a work seems to strike all of those archeology Indiana Jones-esque buttons that make my imagination light on fire. Of course, added to the mix is a kind of magic, both in the form of the Spice Melange and with the orders of the Bene Gesserit, the Mentats, and characters like Doctor Yueh with his Suk training to make sure he is completely loyal (which obviously means that he must be the bad guy, right?) No one makes mention of a wall that is insurmountable in a story if they don't fully intend to make it tumble down at some point.

Another thing that really draws me into the story is being in Paul's head. Honestly, even though he's the Atreides heir and very educated, he knows next to nothing about how the universe works. He also has a relatively solid moral compass, and it's easy inhabiting his thoughts. It is because he knows nothing though that makes the book so good. You learn as he learns, you figure out things as he seems to be figuring them out whether it be the Gom Jabbar or seeing a sand worm for the first time or interacting with the space-faring guild or a Harkonnen. The fact that Herbert had these things in his head is pretty incredible, and he sets the table for his story extremely well by immersing us in political backstabbing theater of the highest order, and then providing us with a protagonist that is not only sympathetic, but has the ability to call upon superhuman powers due to his breeding.

And then of course there is the Spice itself. This thing is as unknowable as The Force is for Star Wars, which is probably where Lucas got the idea to be honest. The Fremen have been around the Spice all of their lives, but they don't know everything that it can do. And layers just keep getting added to those who use the Spice in different ways. In some sense, it is this thing that the author could add a power to later on down the road if they so desired, just saying, "the Spice caused this unknown mutation and it resulted in this and voila...a new thing happened." It's a useful trick for anyone crafting a story, and it keeps the Miracle Exemptions that one requires a reader to absorb to a manageable level so as to maintain the suspension of disbelief.

Anyway, I'm so looking forward to seeing this adaptation of Dune. This is a movie that I will risk going to theaters to see even if Covid is raging the countryside. If you are unfamiliar with the remake or haven't seen the trailer, I'm placing it below.

Posted by Michael Offutt, Phantom Reader at 12:16 AM

Email ThisBlogThis!Share to TwitterShare to FacebookShare to Pinterest
Labels: Dune 2020, I think Frank Herbert would be proud and excited by the Dennis Villeneuve adaptation of Dune