Why did the Walking Dead deviate so much from the Total War storyline in Robert Kirkman's comics when it was so good? 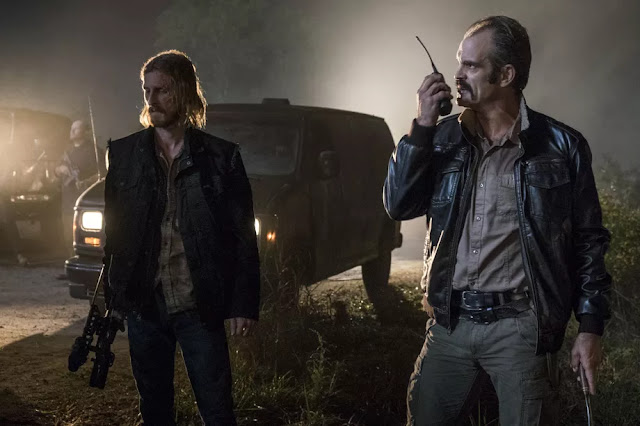 Jumping the Shark is a term that refers to a Happy Days episode. It's a point-of-no-return kind of place from which every subsequent episode is just bad. In my opinion, The Walking Dead has finally lost it and jumped its own shark. This week's episode was ridiculously bad. Please note that I blame writers...as in bad writing. For all the writers out there reading my words, it probably stings, but the truth shall set you free. Spoilers are ahead.

This week's episode was called "Do Not Send Us Astray." It was just bad. Negan's crew under the leadership of Simon decides to attack Hilltop with their zombie-coated weapons, and they get routed by the Hilltop peeps in pretty rare fashion for this show. But despite all the killing by Rick and company, it doesn't ever appear that Simon's crew diminishes in number even though they showed up in what appeared to be like four trucks. How many frickin' people could there possibly be in four trucks?

And then when some people who were wounded turn into zombies at night, people just blunder into them. "Hey are you okay? I'm going to just go out here and-- w-wait! WHAT ARE YOU DOING! Arrrrggghhh..." and death. Like this happens over and over. Death by zombie bite while I'm just sitting on the couch rolling my eyes. If that's not enough, Hilltop has got no one on guard apparently, and the zombies just walk into the house where the people are all sleeping in a huge communal room. One zombie even frickin' falls down the ENTIRE flight of stairs and no one wakes up. So yeah...more screams... "Arrrggghhh! Aahhhh! WHAT ARE YOU DOING?!" blah blah blah.

Outside, one of the kids (his name is Henry) grabs a gun and goes into the place where Maggie is holding the Saviors they've taken as prisoners and demands that the one who killed his brother step forward or he'll start killing. Well they rush the kid and he gets knocked over and they all run out and escape. Sigh. Really?

And then this random guy that I don't even remember from any episodes dies and they play the music that they always play when someone dies that a main cast member really liked (this time it's Carol) and Carol looks all sad. But seriously, I don't remember this guy from any episode. Why is Carol even attached to him at all? Why is she looking sad?

There's (of course) no mention of Negan who we last saw with Jadis who honestly has no reason to keep him alive but of course she is doing just that.

This storyline did not have to go this way. I read the "Total War" storyline of The Walking Dead as written by Robert Kirkman. It was good and totally different. Why did they change this storyline? Why did they deviate so far from it to make it just stupid? I hate this idea that in order to entertain readers of the comics, they have to make things "different," especially when "different" is essentially synonymous with "bad."

It's a good thing they don't have any real competition on Sunday night for viewers. Otherwise The Walking Dead would be in a lot of trouble.

Email ThisBlogThis!Share to TwitterShare to FacebookShare to Pinterest
Labels: The Walking Dead, Why did the Walking Dead deviate so much from the Total War storyline in Robert Kirkman's comics when it was so good