I wish I had a life as interesting and carefree as my Pokemon Go avatar promises his would be. 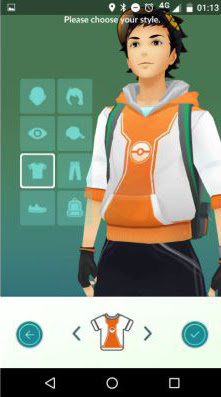 I think my Pokemon Go avatar wears drawstring jeans. I don't even know where you can buy drawstring jeans. Tokyo maybe? He's also much more fashionably dressed for a street punk than I could ever be. He's got spiked hair, wears a cool backpack, and has fingerless gloves. You know, the kind that weight lifters and bikers have that are black and made of leather. But he's still a punk because he looks like he's fifteen years old. It's a good thing he's got sneakers too, because he walks a lot.

Needless to say, my Pokemon Go avatar doesn't look anything like me. But maybe that's the point. Japanese anime always features cute guys and girls who have kind of a gender fluid look, small noses, and long necks. In the worlds of Final Fantasy, Pokemon, Attack on Titan, and Miyazaki, men have always looked more like Tom Holland (who played Spiderman in Captain America: Civil War) than they've ever looked like John Wayne. Usually, the ones that do look like John Wayne (if they're present at all) are there to be villainous.

Did you know that in Japan they have a special soap that gets rid of "old person smell?" It's true, and you can check it out here at this website. If you don't know what old person smell is, it is a "troublesome type of body odor caused by a substance called Nonenal that cannot be eliminated by conventional soaps." I'm sure you've smelled it in nursing homes or visiting your grandparents. I guess my point is not that this "persimmon green tea" soap exists, rather it's that I'm not surprised that the Japanese invented it. Any society that finds body hair undesirable is going to have persimmon green tea soaps. It's an acknowledgement that, "Yeah we all age, but it doesn't mean you have to let it all go. Keep it in check, would you? There are young people about that think you're gross. Stop scaring them."

I wish I had a life as interesting and carefree as my Pokemon Go avatar promises his would be. Aside from being forever young, he looks like he's comfortably sexual and attractive even though I have no idea to whom he'd be attracted to. He's just a bunch of pixels on a screen with perfectly toned skin. And because he's computer generated, I think it's safe to say that he doesn't experience sexual attraction at all as far as I know. So he just walks around, never making a misstep or catching his shoe on uneven ground and tripping. He's privy to the strange world of invisible monsters that supposedly live all around us and by capturing them he gets powerful. He gets stronger as time goes on. By contrast, I get weaker and need to sit down. But at least I'm off the couch.

I think I know why my Pokemon Go avatar doesn't have any wrinkles. I think it's because he doesn't have a soul-sucking job or have to figure out how to afford a house in areas where affordable housing is as mythical as a Pokemon. He also doesn't face the consequences of looking "different." His monsters dance a jig and look cute. Real world monsters are beliefs and attitudes and you can't just zap them with a pokeball.

If only it were that easy.
Posted by Michael Offutt, Phantom Reader at 12:00 AM

Email ThisBlogThis!Share to TwitterShare to FacebookShare to Pinterest
Labels: I wish I had a life as interesting and carefree as my Pokemon Go avatar promises his would be, Pokemon Go