After watching Arrow I want to know if a League of Assassins under the leadership of Oliver Queen would be such a bad thing. 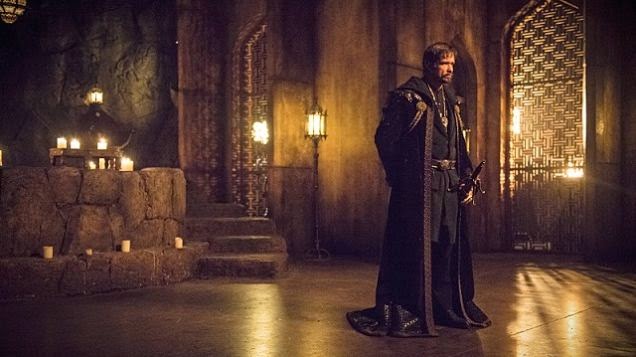 If it's one thing that I've grown to appreciate about the television show Arrow, it's that the tale manages to weave the plausibility that assassins armed with knives and arrows could triumph repeatedly over those who possess guns. This show pays no lip service to the saying, "Don't bring a knife to a gun fight" and we in the audience don't lose any sleep over this.

In this week's episode called "The Offer," our favorite bow slinging warrior of Starling City has been offered to head the League of Shadows and take Ra's al Ghul's legacy as the deadliest man alive...not deadly like Chris Kyle deadly...but deadly because he's a mean bastard with a sword. Suspend your disbelief. Swords and arrows rule the day and not guns. That's just the way it is.

It's an offer that John Barrowman in the role of Malcolm Merlyn insists is "not a choice," implying that should Ollie turn his back on this offer that there will be some horrible price to pay. Well, and there's this pesky prophecy that foretells if anyone survives a fight with Ra's al Ghul, he would take Ra's place in the League of Assassins. I would say, "Don't take stock in prophecies..." only this is a show that is clearly grounded in a universe where magical and wondrous things happen. So yeah, prophecies have weight.

Ra's al Ghul created the League of Assassins to hunt down and kill people he deemed a danger to society. All of its members go through a harsh and bitter training. Those that survive become incredible warriors. Think Nietzsche who coined the phrase, "That which does not kill us makes us stronger." The League is very old-fashioned, has a medieval Japanese sense of honor (out of all the cultures on Earth, the Japanese took honor to ridiculous levels), and each member has a signature weapon. But most important, Ra's al Ghul's word is law. Whoever is in charge would change the chemistry of the entire group to make it a reflection of the one up top.

So what would it look like under Ollie? I'd like to think that (if he were to accept Ra's offer), then the League's incredible resources could be made to do some good in the world that (from a viewer's standpoint) appears awash in evil. I'm not really sure why Oliver Queen is turning his back on the offer from "Evil, Incorporated" other than he enjoys his personal crusade and doesn't really want help on that kind of a scale to accomplish his goals. Or maybe he just doesn't trust himself, and perhaps is cautious of the lure such power would bring and worries it could possibly corrupt him. Let's face it, Ollie isn't exactly a nice guy, having killed numerous people, tortured others, cheated on his girlfriends, and done any number of other horrible things. He's the quintessential anti-hero, and I suppose the offer from Ra's al Ghul really shines a spotlight on this whole hot mess of a guy and asks the question, can anti-heroes be entrusted with incredible power and responsibility?

What do you guys think? Perhaps the answer is clearly "no."
Posted by Michael Offutt, Phantom Reader at 7:47 AM

Email ThisBlogThis!Share to TwitterShare to FacebookShare to Pinterest
Labels: After watching Arrow I want to know if a League of Assassins under the leadership of Oliver Queen would be such a bad thing, Arrow, League of Assassins