Star Wars Rebels seems to be hitting its stride at last 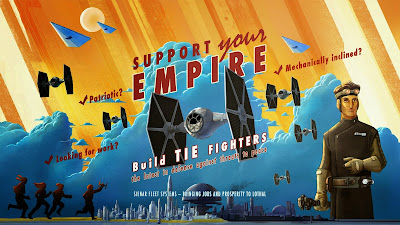 Star Wars Rebels is about seven episodes in now, and I have to say it's growing on me. At first, the series seemed like all it wanted to be was a family-friendly show. For example, the first couple of episodes didn't have the feel of any kind of "dark" villainy which is an essential component to Star Wars. After all, things are either black or white in the Star Wars universe; there is no gray. Oh and the second rule of Star Wars is that things are big as in VERY big. But I digress.

So yeah, it's growing up a bit as we're getting plot lines where characters are actively pursuing undercover roles in an Imperial academy to get good intel that the alliance can use to fight the Empire. That and Star Wars Rebels is investigating the Force more (and I like that too). Finally, it's also tying itself to The Clone Wars, which as far as cartoons goes, rates as one of the finest ever made. For example, we got a plot line that led to a prison world to free captured Jedi Master Luminara Undulee only to find out that she'd been killed, and that the Imperials under the Inquisitor were just using her bones to lure Force users out of hiding.

Now as for the Inquisitor himself, I love his appearance and voice, but his lightsaber is kind of ridiculous. You see, it has the ability to spin like a fan, and this seems kind of pointless if not an all out desperate to appeal to the "under thirteen" crowd who will no doubt think "it's cool" without considering if the weapon is even practical (which it isn't). However, if one thing is cool about this series, it's the artistic license that they're taking with respect to Ralph McQuarrie's old illustrations. The lightsabers are thinner and more pointy and the animated hair even moves in the wind.

I am wondering if (at some point) Ahsoka Tano might put in an appearance. By the end of The Clone Wars season five, she decided to leave the Jedi order but she was incredibly powerful. I think it would be interesting if she decided to help the galaxy that is now under the foot of her former master, i.e. Darth Vader, who I'm sure "Rebels" is waiting to introduce in a season finale or something similar just to drive up ratings.

If you've been watching Star Wars Rebels, what do you think? Yay? Nay? It's definitely got my appetite primed for the movies that start arriving as early as next year.
Posted by Michael Offutt, Phantom Reader at 12:12 AM