Does America have a cultural identity problem? 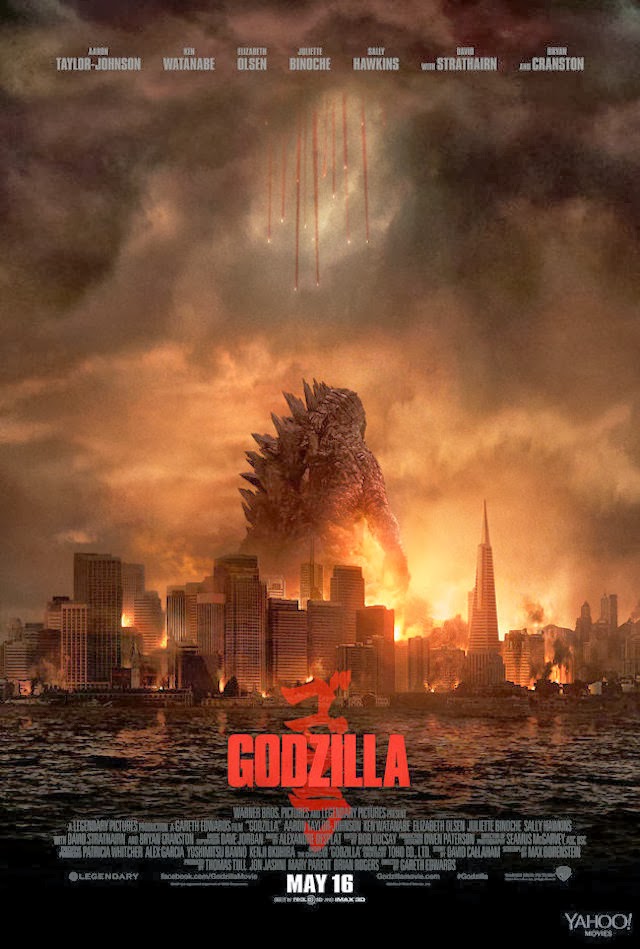 The new Godzilla poster that came out this week makes Godzilla look bigger than I have ever seen him. The tallest skyscraper in the shot barely comes up to his elbow. It makes me ask a couple of questions. The first (and most obvious one) is: Does this poster intentionally mislead its intended audience? I mean, the previous Matthew Broderick incarnation also had a huge Godzilla foot superimposed with cars and that movie's catch phrase was "Size does matter." So everyone that's been making Godzilla movies agrees that at least "size matters" for this particular kaiju film and that "bigger is better." And the 1976 King Kong had Kong so huge he was straddling the World Trade Center while holding a jet fighter. But we all know that Kong was never that big (not to mention that there wasn't a jet fighter getting caught).

The other question that pops up in my mind (again related to size and importance) is this: do Americans suffer from a cultural identitity problem? The gargantuan prominence of "Godzilla" (Japanese icon) in a clearly American city such as San Francisco makes me truly realize how much we borrow from other cultures to create our own kind of absurd take on things.

Let's just take a jaunt around the web to other bloggers (who are American) and see what we find. At Matthew MacNish's place abbreviated the QQQE we discover that Matthew identifies with all things Japanese. If we go over to L.G. Smith's blog, it's the British Isles. I am reminded of the time when Mitt Romney (as the Republican presidential challenger" said, "We are part of an Anglo-Saxon heritage" and hinted that he'd like to restore a bust of Sir Winston Churchill to the White House (when no restoration is needed because it's still there).

And then we have Katy Perry's new video.

It's tacky, cheesy, and I still love it. We've got the twinkies pyramid, a tattoo-inspired Isis at the end, neon and smurf-colored Egyptians, and it all screams "Bitch, we're fabulous" in volumes. Seriously, you should watch this video.

I guess my point, which really was started by staring at the Godzilla poster, is this: What is American exactly? I have trouble pointing out a distinctly American style because it all seems to be borrowed from something else. On Squawk Box yesterday on CNBC (I watch it in the morning because it has the best stock market news) one of the announcers said that Ralph Lauren is a distinctly American brand. Okay, so does that mean Polo shirts and all things Ralph Lauren are what Americans are supposed to look like?

Or is Ralph Lauren borrowing its fashion designs from some other culture?

When I travel to the southwest, I see a "style" of building that seems to have a very strong Spanish theme to it. When I look at our government buildings, I think "Greek." I mean, our capitol does have a resemblance to the Parthenon in Athens. Louisiana is of course very French. And Las Vegas is well, such a hot mess that it defies description.

Maybe Google's home page is the most uniquely American thing ever. It just says what it is in color and then is surrounded by a blank page. Maybe that's what America is: a blank page. And anyone can color it to be exactly what you want, which is arguably the most fabulous thing ever, but kind of boring too.

What are your thoughts on this topic?
Posted by Michael Offutt, Phantom Reader at 5:46 AM

Email ThisBlogThis!Share to TwitterShare to FacebookShare to Pinterest
Labels: Does America have a cultural identity problem, Godzilla, Katy Perry