In watching the Boys on Amazon Prime I keep thinking that all this stuff is way too real. 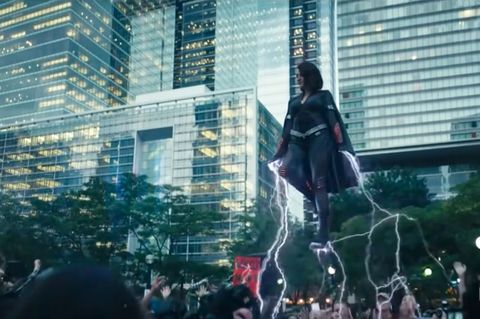 The second season of The Boys is almost over, having aired its seventh episode this last week. This season, the storyline of The Boys added a new character called "Stormfront," whose name is taken right from a website touting white supremacy. Wikipedia writes:

"Stormfront" is a white nationalist, white supremacist, anti-Semitic, Holocaust-denialist, and neo-Nazi internet forum, and the Web's first major racial hate site. In addition to its promotion of Holocaust denial, "Stormfront" has increasingly become active in the propagation of Islamophobia."

In the show, the character of Stormfront is a sociopath whose end goal is to usher in an age of supremacy for white superheroes (called "supes" in the series). This character uses social media to drum up fear about non-Whites invading America (and "un-American" is clearly code for being "non-White").

The seventh episode opens by following a man who becomes radicalized by consuming Stormfront's sub-textual and racist rhetoric about how Americans are under attack and in danger from outsiders. His whole worldview changes over just a few minutes of compressed time, until these internalized hatreds all boil over when he blows away a non-White convenience store clerk because he thought that the guy might be a super terrorist (and therefore bulletproof) and he was hellbent on exposing this. Note that this was a clerk he'd visited a countless number of times, and who always treated him with respect. But he became the enemy and "bam," was murdered by this newly-minted "domestic terrorist," who had taken it upon himself to defend America. What's even more cartoonish is that the shooter seemed to experience real remorse once he realizes he just murdered someone. In the real world, shooters don't seem to have any remorse over the things they have done. Truth is stranger than fiction, right?

But let's take a moment and think about this whole scenario I've outlined above. What does this sound like to you? If you are thinking of organizers like Unite the Right and individuals like Kyle Rittenhouse, then you're in the same camp as me.

It also doesn't stop there. After the guy's murder, Stormfront (the actual Nazi who is in a thinly-veiled disguise) condemns the shooting, adding that their (meaning her's and Homelander's) thoughts and prayers are with the shooting victim's family. It's said with enough casualness to show they understand how empty and meaningless those words are, but they also seem to be powerful and useful to project an aura of caring (which is difficult for a sociopath to do).

The Boys feels like a twisted mirror reflecting what I see as 2020 American reality. The hypocrisies uttered by the main characters are dwarfed by the enthusiasm of a crowd that applauds their every word. And despite having all the power in the world--there is a part during the second season when Homelander acknowledges fully to his pre-teen son that they are "gods"--they manage to convince normal, powerless people that they are the victims.

I'd say it's too much but...it isn't. It feels real. I won't ever understand how a person who knows they are untouchable and recognizes that they are, in fact, a god could ever play the victim. Or that anyone would actually buy the story that they are a victim. But I don't need to understand why this happens. All I need to know is that it does happen every single day. America's poor and helpless absolutely love to coddle its rich and powerful and continue to sacrifice to ensure that their priorities and goals are well satisfied.

It's just all too real, peeps.

Posted by Michael Offutt, Phantom Reader at 7:56 AM

Email ThisBlogThis!Share to TwitterShare to FacebookShare to Pinterest
Labels: In watching the Boys on Amazon Prime I keep thinking that all this stuff is way too real, Stormfront, The Boys