Behold the actual size of a Woolly Mammoth. 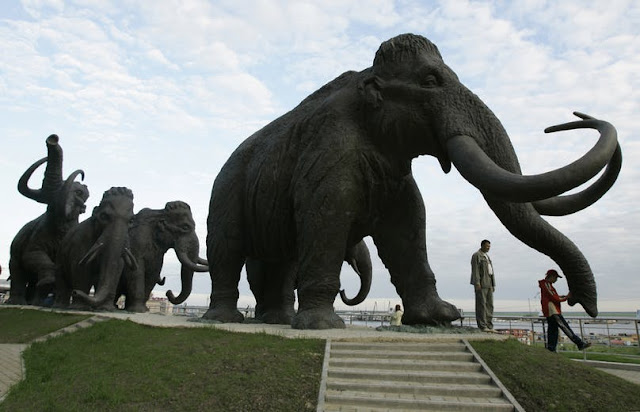 I knew Woolly Mammoths were prehistoric creatures and that they were big. I know elephants are big, because I saw them in the now extinct Ringling Brother's Circus before it was not okay to have elephants in circuses anymore. And, yes, I've seen them in a zoo too. But the circus elephants left more of an impression on me because people were always crawling all over them and doing things.

So the above picture is a photo of "life-sized" sculptures of mammoths located in the Siberian town of Khanty-Mansiisk. I found it while reading scientific opinions written by mostly scientists on the ethical implications of bringing back Woolly Mammoths from extinction via cloning. Folks, that person posing with the trunk looks tiny in comparison. There's no mention of how tiny that person is, but I'm guessing maybe 5-foot six-inches or thereabout. Anyway...I'm a little in awe of how big these creatures actually were. I can't imagine how much a thing like that needed to eat, but I'm sure it was a lot. Honestly, it's kind of amazing how big some creatures get on our planet.

On a side note, did you watch the Oscars last night? I'll be blogging about the Academy Awards on Wednesday.
Posted by Michael Offutt, Phantom Reader at 1:38 AM

Email ThisBlogThis!Share to TwitterShare to FacebookShare to Pinterest
Labels: Behold the actual size of a woolly mammoth, It's Science