Not Tomorrow Yet makes it easy to call The Walking Dead the most brutal show that has ever aired on television.

Spoiler Alert: I am talking about Sunday night's The Walking Dead episode called "Not Tomorrow Yet." 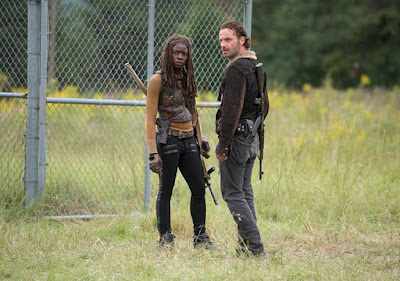 Has there ever been a show on television as brutal as The Walking Dead? I'm so thankful for "Talking Dead" because, after watching a show like "Not Tomorrow Yet," I feel like I need to decompress. The brutal slaughtering of people that they didn't even know reached new levels of emotional shock for me than I had anticipated. And yeah, I did know it was coming, but it just seemed far more horrible outside of a comic book and splashed all over the screen (in one scene blood spray stuck to the camera lens in a kind of "Deadpool-esque" break the Fourth Wall moment).

So last night we saw Rick's group of warriors go up against what I think is a small contingent of "The Saviors" who probably have a much larger and stronger army. This was a kind of "outpost," but the killing is definitely stirring up a hornet's nest that will lead to all out war. And the reasoning behind the attack was very logical: it's us or them. To some extent, it's a reflection of modern politics with fear spreading through a population and more and more people raising their voices in a chorus demanding radical action to guarantee safety.
This episode was a dramatic shift in the narrative of The Walking Dead. Instead of being defenders, Rick's group moved into the position of being the predator at the watering hole. I suppose the transition has been a long time coming with Rick's crew trying to avoid violence whenever possible. It reminds me of a quote I heard one time that went something like this: "Hostility and violence doesn't solve anything. It solves everything."  If you lived in a post-apocalyptic world with zombies and knew that a violent group was out there that would come and take all of your resources and perhaps harm or even kill people in your community, could you take on the role of an assassin and strike them first?

I'm glad we don't live in a world like that...yet. And I hope we never will.
Posted by Michael Offutt, Phantom Reader at 12:02 AM