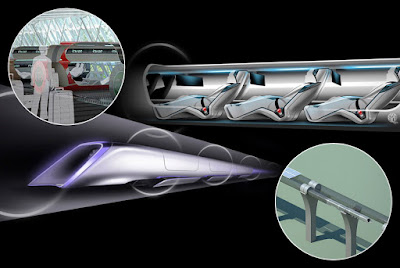 I think I've said this before, but Elon Musk (the C.E.O. of Tesla) is Iron Man. I say that because 1) he's super rich, 2) he's a genius, and 3) he basically brings into reality whatever he wants to envision. A few years ago, it was this thing called the hyperloop. Imagine a space age glass tube that runs from Los Angeles to San Francisco and can transport passengers inside it back and forth in 30 minutes. Well CNBC (source of all things stock market and well...Davos...) has said that this thing is going to become a reality within two years.

According to the news release on CNBC, the hyperloop works by "transporting a number of passengers in capsules that would be propelled by magnets up to a speed of 750 miles per hour." Basically, Hyperloop Transportation Technologies has filed for the first building permit for an eight mile long test track that will be completed within two years at the cost of about $100 million. Elon probably carries that around in his wallet.

I love that so many of the things that I saw in early science fiction films is becoming a reality. Those tablets that people typed on in Star Trek: the Next Generation got realized with the iPad. The smartphone is basically better than any communicator we've seen in James Bond films. And now the Logan's Run hyperloops that we saw ferrying people back and forth to domed cities is totally coming true. When will we be getting androids that look like humans via Blade Runner? I'm sure it's in the works.

To learn more, just watch the video below:
Posted by Michael Offutt, Phantom Reader at 12:00 AM

Email ThisBlogThis!Share to TwitterShare to FacebookShare to Pinterest
Labels: hyperloop, The world's richest people are meeting at Davos again and they're talking about the hyperloop