Why are Sabrina watchers asking real life witches and satanists what they think of the show? 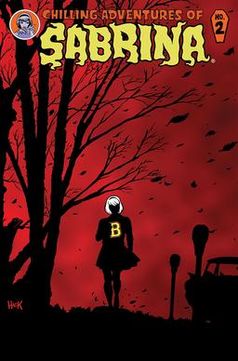 My friend Meg got me to watch the Chilling Adventures of Sabrina with her this last week. If you haven't watched it, the series is like the hybrid baby of Tim Burton's Sleepy Hollow, A Norman Rockwell painting of small town America, and the movie Mean Girls. I thought it was clever, threading the needle with its plotline that somehow managed to give the audience room to sympathize and actually like the protagonist without compromising on the darkness and actual evil associated with Satan worshipers (in the town of Greendale). The fact that it exists alongside Riverdale (a CW series) is even more interesting, because it makes magic a completely plausible plot device. Not that Riverdale needed magic to be interesting...but that it takes place in a world where Harry Potter could actually happen opens up a ton of storylines beyond the old "teen angst" baseline where a lot of similar tales go to die.

However, since I read Facebook at least once a day, I've also discovered that I know people who are also watching the show, who like it, and who are asking real life witches and Satanists (whom they know) to weigh in on its authenticity. Why is this happening? The Chilling Adventures of Sabrina is a comic book, just like Archie and Jughead is a comic book. No one I know has ever asked worshipers of Thor and Odin (yes they are around and they still exist), whether they are offended by their portrayal in a Marvel movie. It's kind of got me flabbergasted. Who cares what any of these groups think? It's fiction people! Comic books are their own intellectual property, and I don't think anything in them demands the approval of real life organizations on how they are portrayed. The following is a message that many people are familiar with already:


This is a work of fiction. Names, characters, businesses, places, events, locales, and incidents are either the products of the author's imagination or used in a fictitious manner. Any resemblance to actual persons, living or dead, or actual events is purely coincidental.

Does no one but me not understand the difference between fiction and reality? On second thought...please don't answer that. I forget that I live in a world where I know a woman who buys colloidal silver online because it's cheaper that way, and it's a "cure" for all the myriad things that ail you.

I can answer my own question, because I know how people are. For example, I suppose in the end, that people just want a reason to discuss something and asking them to weigh-in on something like a popular t.v. series is like raising them up onto a pedestal with the words "Subject Matter Expert" engraved upon it. For a day, they get to pretend that they are Neil deGrasse Tyson, asked to weigh-in on the scientific inaccuracies in the latest Hollywood Blockbuster (only in this example it is Satanism and Witchcraft). And don't bother to try and tell them that they share more in common with a snake oil salesman than they do to the famous astrophysicist. It's not a good way to make friends.
Posted by Michael Offutt, Phantom Reader at 7:00 AM

Email ThisBlogThis!Share to TwitterShare to FacebookShare to Pinterest
Labels: The Chilling Adventures of Sabrina, Why are Sabrina watchers asking real life witches and Satanists what they think of the show