The Halo pilot on Paramount + was pretty good. 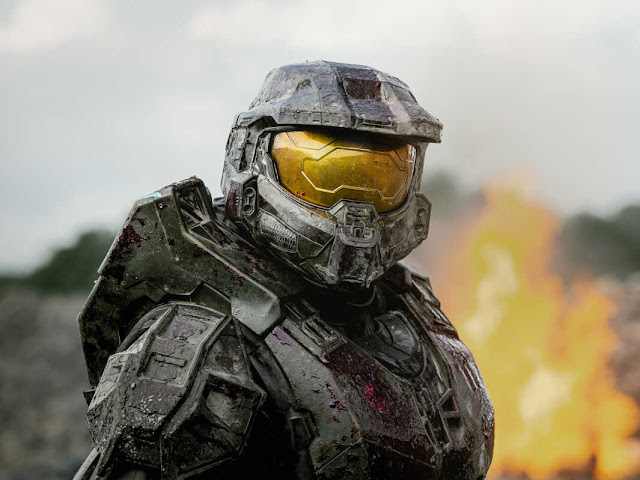 I watched the pilot of HALO on Friday evening on Paramount + (a streaming service formerly known as CBS All Access). I did like it quite a bit, even if the action was a bit "floaty" at times with some questionable computer-aided imagery thrown into the mix. I never played the game, so I had no idea what to expect aside from the fact that the Spartan skin-hugging armor that Master Chief wears has become ubiquitous as "cool" in nearly all speculative fiction stories from the Mighty Morphin' Power Rangers to Iron Man to G.I. Joe.

And G.I. Joe via Snake Eyes kind of established the "modern" ninja look (which we've also seen done in video games like Mortal Combat and Crysis). In other words, it's not much of a stretch to say that Master Chief's armor in HALO is "Japanese "inspired." Anyway, because I knew that this thing was being adapted from a video game, I wanted violence, and the show did not disappoint. It became pretty clear that this was going to be a war of some kind on an interstellar scale, pitting humanity against genocidal aliens. This isn't exactly a new trope, as we've seen it in all kinds of stories. One that comes to mind right off the bat is Old Man's War by John Scalzi. To state it another way, the Covenant weapons were extremely brutal just causing people that got hit by their ammunition to explode violently (or die in some other horrible manner).

If you don't know what I'm talking about, the Covenant is the alien species that seems to be the big antagonist in the show. The pilot shows them wielding fantastical technology and displaying some kind of religious reverence for an artifact (I have no idea what this thing is). But when Master Chief touches the artifact, it seems to reprogram his brain so that he now has empathy (which I guess is bad for a super soldier). As far as the set pieces go, I really miss the cinematic quality of Star Trek: Discovery, which must command a much higher budget than HALO. I mean...it's pretty obvious. Everything looks too plastic and clean. The costuming is not all that good. And when we saw the aliens, it made me wish the Henson company was called in to do puppet work for close-ups, because there was just something missing. However, I still liked it. As far as pilots go, it was good.

Another thing I got from the pilot episode is that the UNSC seems to be an organization that is interested in doing the right thing, but only when it suits them. Additionally, what's going on with the Spartans (the elite warriors like Master Chief) seem to all be brainwashed so that they would be good at killing everything that the UNSC saw as a threat. So at first blush, it also seems to be a story of a military dystopia kinda like Starship Troopers.

Anyway, those are my first impressions of the show. Did anyone else watch? If so, did it meet your expectations or did it disappoint? One last fact that surprised me...the executive producer of the show is Steven Spielberg. With his name attached, I'm honestly surprised that the pilot didn't look more polished.

Email ThisBlogThis!Share to TwitterShare to FacebookShare to Pinterest
Labels: HALO, Master Chief, The Halo pilot on Paramount + was pretty good